Description:
Interactive light and sound installation. At the base of the installation, a circular 12 m diameter wooden platform, on which sit 56 5.5 meter tall vertical steel poles, creating a ‘steel forest’. Each of the steel poles is connected to a touch-sensitive sensor system. The installation is the interface through which light and sound can be physically experienced and controlled. Touching a pole evokes a specified sound that echoes and melts with the next touched pole sound. Touching a series of poles will produce an echoing harmonic accord. The light design has great importance in the installation and it was carefully designed to achieve the right texture of shadows and lights. The spotlights create different compositions of shadows on the wooden surface. 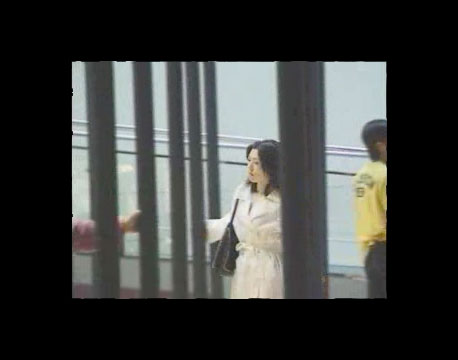 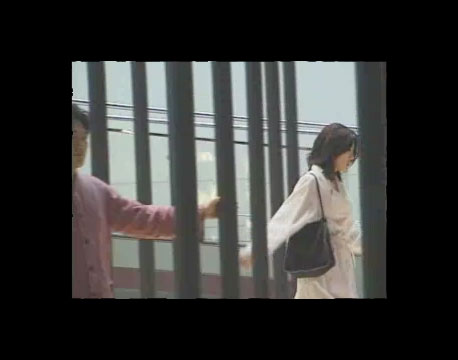 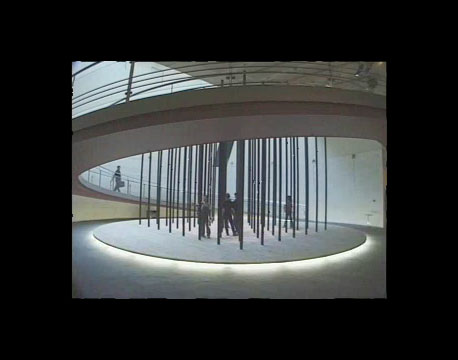 Description:
Skintimacy is a skin-based musical interface, that explores interpersonal boundaries through collaborative musical performance. Skintimacy deals with the question: How an intimate interaction between two bodies can be experienced through or translated to sound? It is an evocative tool for interpersonal interaction through touch and an alternative experimental collaborative musical instrument that creates bodily-close haptic and emotional experience.

In ‘Audio Grove’, Christian Möller uses light and shade to create a changing atmosphere activated by touch sensor poles that activate mystical sounds. The entire feeling is that of being in a fantasy landscape in the realm of virtual reality. In his own words, the experience “always results in a harmonic whole, whatever the conceivable combination of interactions”. In my opinion, this is the downside of the work: the interaction always summed up by pleasant New-Age relaxing music. Regardless of which pole one touches, it doesn’t produce any real influence on the soundscape. Even the most violent or rapid contact with the poles will produce harmonies and pleasant music. In addition, the sheer size of the work does not allow real control by the viewer. In case more than one viewer activates the work, the resulted experience is not much different then if the music and lighting behavior would have been predetermined and programmed, and not activated by touch.

Skintimacy acts as a tool that provides sound based on the physical contact between two individuals. The result is very sensual and poetic. The music is being created by intimacy, with various areas of the body creating different sounds. Lovers can play with each others body-music. It will also be interesting to see how this device can be used in therapy. As a tool it has its problems: It’s a bit clumsy and delicate. One needs to put a ring with a wire going to the arduino from which more wires go out to a battery. Another software processing card and a cable connecting to a computer connected to an amplifier and loudspeakers is required if one wants a decent sound. There are too many delicate connections that can easily be disconnected by mistake. With all that exposed wiring the freedom of movement is being damaged, and limits the manner in which the players can interact while using the tool.

Description:
A wearable wall, portable structure worn as a backpack is used in a variety of situations. Dressed up for breaking out of the actual physical form and dimensions.

Description:
The project deals with Indeterminacy in music. The movement that promoted this discipline began in early 20th century, but finally gathered around the work of the experimental composer John Cage in the 50’s. The group aspired to dissolve the fixation and free the musical element, and turn it into a fluid process that breaks the composer’s control over the material. The sounds have equal value chosen by the composer (In wallSound, the composer as a machine/system builder), the performer (body), or by the unpredictable sounds coming from the surrounding.

The Art of Noises

Description:
The choice of sounds is mostly inspired by the 1913 Futurist manifesto ‘The Art of Noises’, written by the Italian painter and composer Luigi Russolo . Russolo argued that the human ear became accustomed to the noise of the industrial soundspace. The ‘new’ music should be drawn from the industrial city sonic palette, that is based on machines, electronics and other technologies. In order to provoke one’s emotions, the composer must create a more complex polyphonic musical pieces to overtake the ear accustomed to these patterns.

Photo of Russolo, Ugo Piatti and their “noise intoners” (intonarumori), Milan circa 1920.

developed by the choreograph Ohad Naharin