A musical interface that produces beeps and sound effects 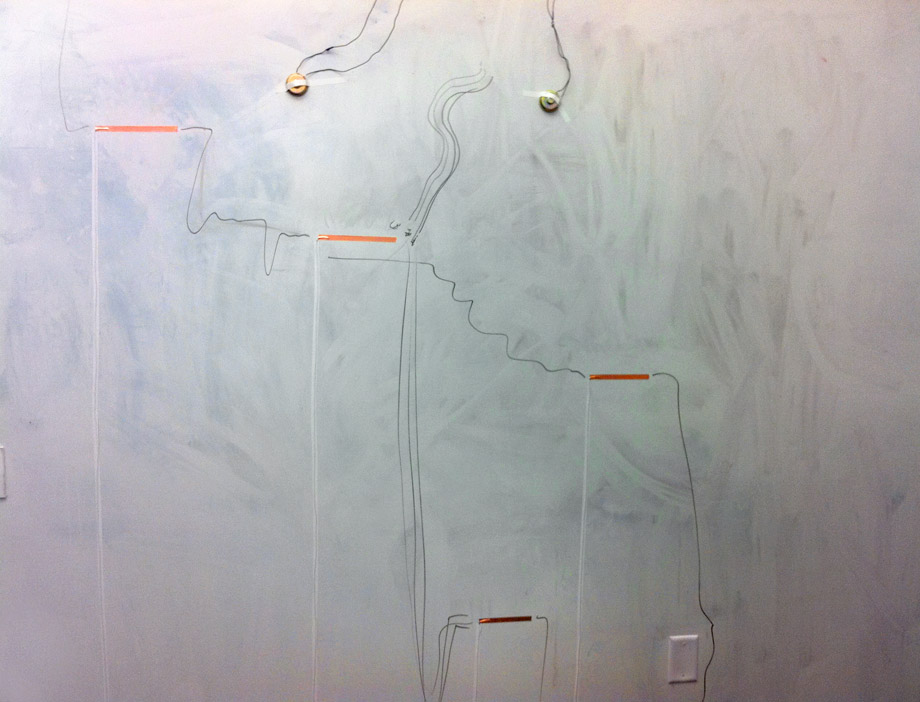 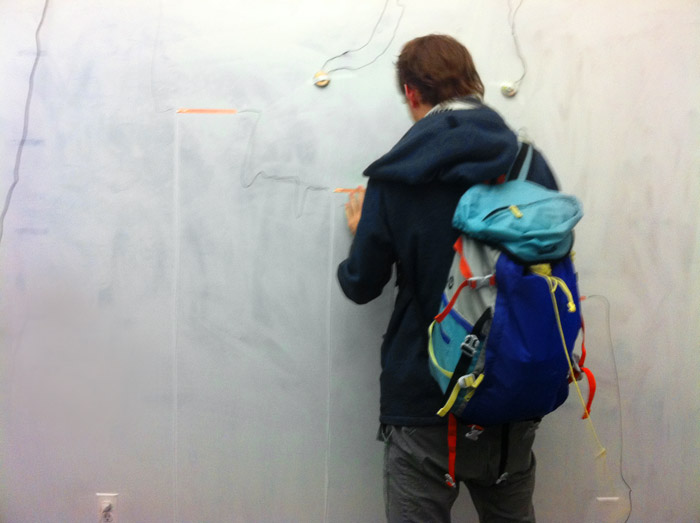 Iteration 2. a wall between us

An illusion of a couple fighting behind the wall 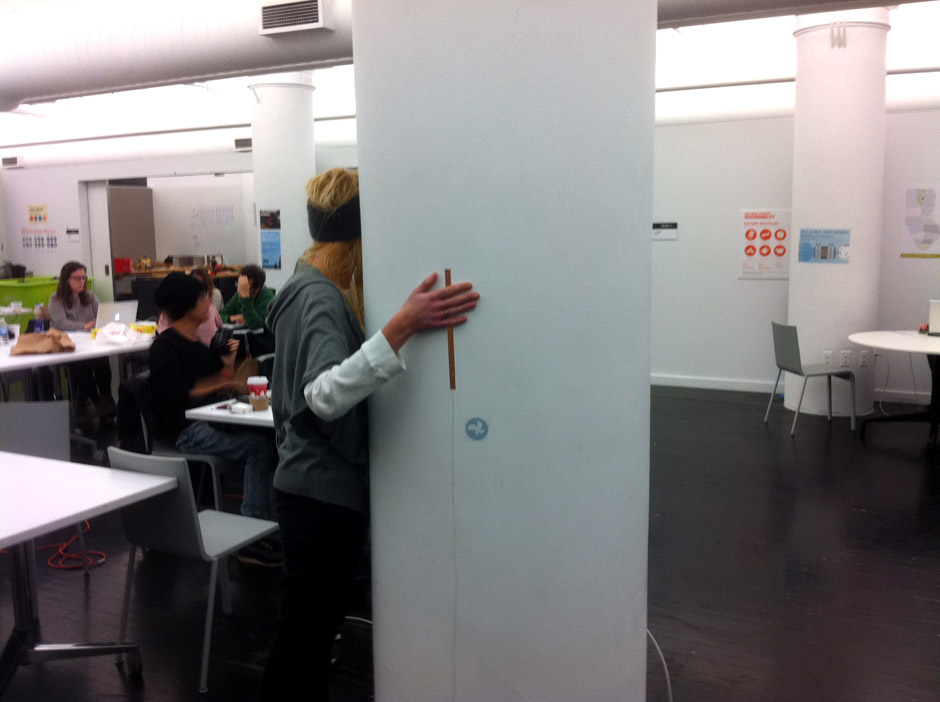 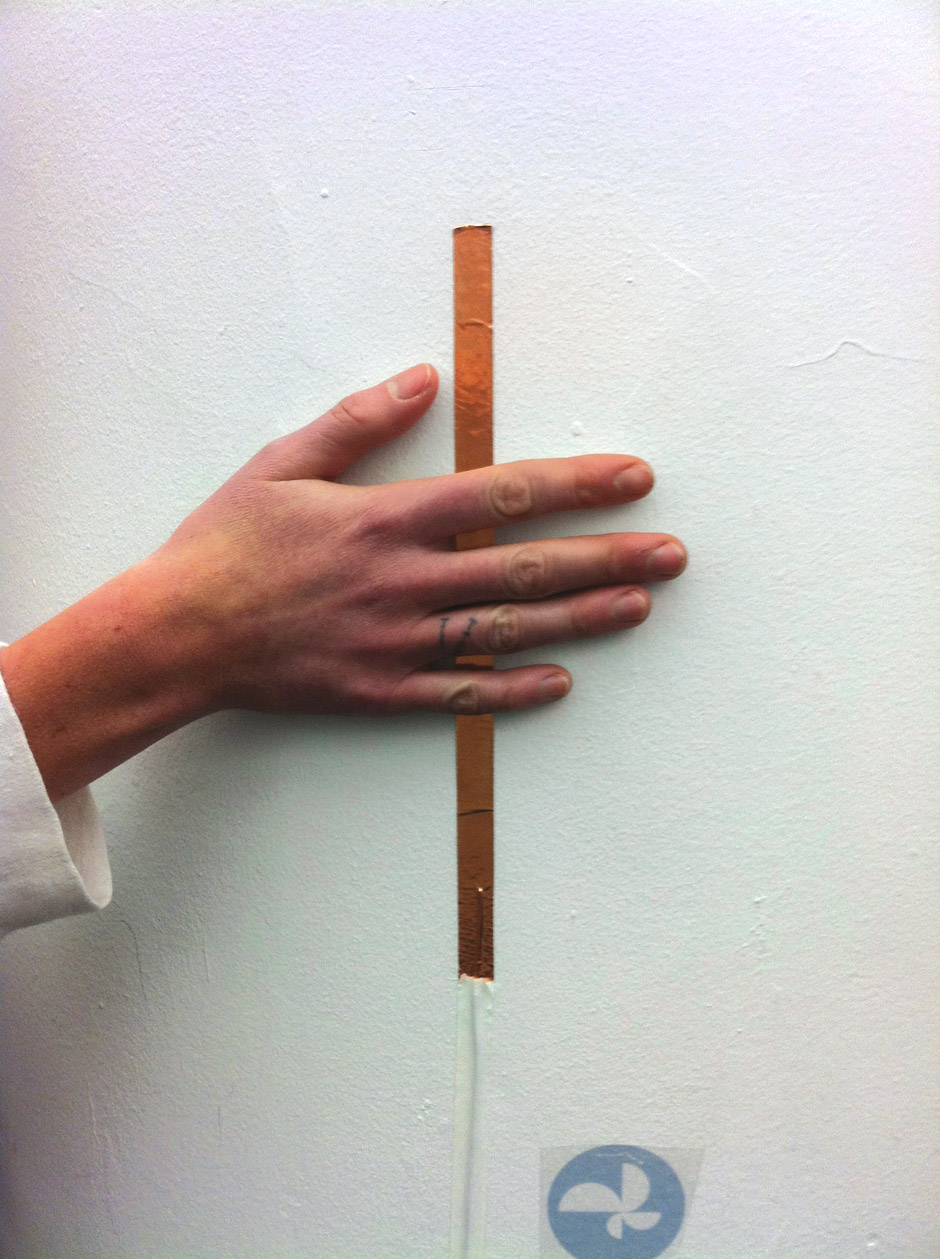 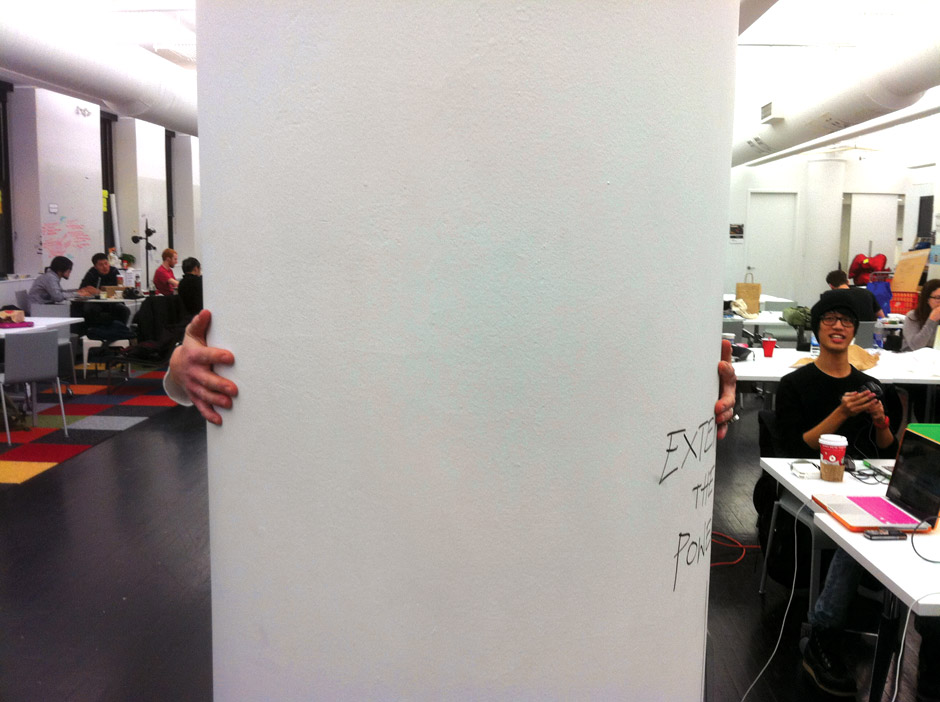 In the first iteration called “wallSound”, the wall becomes a playful musical interface that produces beeps and sound effects. In this iteration, the speakers are revealed, becoming a part of the interface design. This first iteration was made to check the assumption that people will be attracted to the copper stripes with its shiny texture and will be curious enough to touch it. The loud generic sounds gave a quick feedback, and made a fluent interaction.

In the second iteration, “a wall between us”, the wall creates an illusion of a couple fighting behind it. Touching different copper stripes will activate male or female roles in a dispute. The muffled sounds enhance the illusion of forbidden eavesdropping to a private conversation and makes the viewers press themselves against the wall. The speakers were partially revealed, ruining the illusion of a true wall separating the viewer from a steaming private conversation. This iteration was made on a wall that affords sketching and some free illustrations covered the wall, disrupting the clean minimalistic design and adding unnecessary and unclear elements to the story. The interaction was clear to some and confusing for others: No instructions were presented. The curious ones managed to reveal the story through the desired interaction, but many missed knowing there must be some expected experience, and were frustrated by the impermeability of the wall.

In the third iteration “waterPole”, two stripes of copper are positioned vertically one across another on a pole. Touching both stripes simultaneously makes the viewer wrap their arms around the pole in a hug, and the wall in return hugs back with soothing sounds of running water. There were no instructions given to the viewer. Due to the fact that it is impossible to see the two stripes simultaneously and hard to discover the feedback that is being given only by touching both, this iteration did not produce affordances revealing the interaction. When given specific instructions, viewers enjoyed the interaction: the relaxing effect of the hugging act, the cold texture of the pole, the soft natural sounds, and they stayed in the pole-hugging position for a while, mostly smiling.

After revising all three iterations, conclusions about the final design have been made regarding the look, feel, interaction and content.

The wallSound final setup consists of vertical and horizontal copper stripes distributed on a clean wall. The composition with the stripes being placed on the wall are drawn from the consideration of the target audience’s height (adults, children), space acoustic and the desired body movement and combinations. Hookup wires attached to the copper stripes go down to the floor, covered with white tape, giving a clue that can lead to the exposure of the structure and the apparatus driving the installation. The wires run along the floor to the far side and into a box attached to the lower part of the wall which hides the Arduino board and the electrical circuits. Above the stripes, attached to the wall, are the speakers vibrating the sound into the wall, creating the illusion there is a scene going inside or behind it.

Most of the required wiring work is being camouflaged with regular ready-made objects that the eye is accustomed to when placed on walls, like wire management system boxes, pest repellent devices and wiring tracks. Code written in Processing activates patches of mp3’s being played whenever one of the copper stripes are being touched. In accordance to the iteration’s concept, the sounds are being played in stereo, or different sounds being played by different speakers. On a tiny piece of white tape, the words ‘touch me’ appears, daring the viewer to touch. Like crows, humans are drawn to shiny materials. The copper texture combined with the clues being spread through the wiring system with the teasing text create new wall affordances that imply a process of playing and revealing the content through touch and movement.

Content wise, after three iterations of the wall being used to generate experience, it seemed interesting to put the wall at the center of attention by turning it into a living vibrating independent entity for the final iteration. Touching the wall will reveal its true personality and needs.